One major reason for the decline of bats is the loss of habitat. One option to counteract this problem is install a bat house. 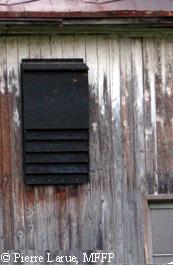 A bat house is a shelter where bats can roost during the day. Setting up bat house can help facilitate the conservation of bat populations. Furthermore, if you want the bats to leave your house, but still keep them in the surrounding area, setting up bat houses can help keep bats in the area after removing them from your buildings.

In order to maximize the success of bat houses, here are some guidelines:

The occupancy rate of bat houses is variable. Research shows that it depends more on the location than the design of the bat house. Moreover, larger bat houses are preferred by some bat researchers because they provide better heat retention and they are less likely to cause the bats to overheat. If you have excluded bats from their usual roost, you can increase the chances of them occupying a bat house by putting it as close as possible to the entrance of their previous roost.

Bat house maintenance is very simple and should be done in spring before the birthing season or in fall, in preparation for the following. Bats usually leave reproduction sites for their hibernation site at the end of summer and come back in spring. Before cleaning, make sure you are well prepared and that no bat uses the house. Excluding bats could result in serious consequences for them.

For your security, wear a N100 mask, gloves, and protective glasses. Look for the presence of spider webs, wasp nests, guano, or any other undesirable elements. Remove them and clean the bat house with a brush, hot water, and non-toxic soap. If there is mold on or inside the bat house, it must be removed with a metallic brush and a mix of hot water (90 %) and bleach (10 %). After cleaning, rinse the bat house with abundant water and let it dry. Check the house’s hardware and tighten or replace any loose screws. If the damage is noticed, it is suggested to caulk the holes and cracks using silicone in order to a stoplight, wind, and water from entering. Finally, if needed, you can repaint the bat box with black or dark water-based paint. A house that suits bat requirements has a higher colonization probability. If your bat house has not been used for a few years, move it somewhere else where there is a better sunlight exposition. When cleaning is done, disinfect all your equipment using a mix of hot water (90 %) and bleach (10 %) and wash your hands properly with hot water and soap.

If you want to set up bat houses, you can buy them from certain retailers or even build them yourself (Bathouse List). If you acquire them from a retailer, make sure that they are in compliance with the criteria listed above. You can find local retailers by looking on the internet.

Should you be concerned with rabies when drawing bats into a bat house?

Like most mammals, bats can contract rabies, but the very wide-spread rumour that most of them are rabid, i.e. carry rabies, is false. Generally, a rabies-infected bat can no longer move about after 48 hours and dies within four or five days. However, it is still important to be careful around bats since the rabies virus can be excreted in the saliva of bats for varying periods of time, up to 12 to 15 days, before clinical signs appear. . Never touch a bat without having taken all of the appropriate precautions.