What is white-nose syndrome?

In 2006, a microscopic fungus was introduced from Europe to a tourist cave near the town of Albany, New York. This introduction led to the appearance of white-nose syndrome (WNS) in North America, a fungal infection that is causing one of the most drastic declines ever observed in an animal group. Until recently, the fungus causing the disease was unknown. However, a group of American experts recently identified the fungus as a new species by the name of Pseudogymnoascus destructans. This fungus, which thrives in cold and humid environments, grows on hibernating bats and infects the wing tissue and muzzle. Since bats prefer to hibernate in humid caves and significantly lower their body temperature and suppress their immune system to enter hibernation, they are susceptible to the fungus. As a result, it has propagated widely through bat populations.

White-nose syndrome (WNS) is transmitted through contact between individual bats, which causes the fungus to spread rapidly. The fungus mainly attacks exposed portions of the skin such as the muzzle, ears and wings of bats. WNS is spreading at an impressive speed of about 200 km per year. The swarming behavior adopted by bats in the fall is one way WNS can be transmitted between populations. Moreover, as some species hibernate away from swarming sites, this could also influence the spread of the infection. The disease also may be spread by bat species carriers of the fungus that do not develop the disease, including silver-haired bats and big brown bats. Finally, the fungus, can also be spread by humans who visit contaminated sites and enter into non-contaminated sites. It is suspected that humans introduced the fungus into North America, after visiting an infected European site. 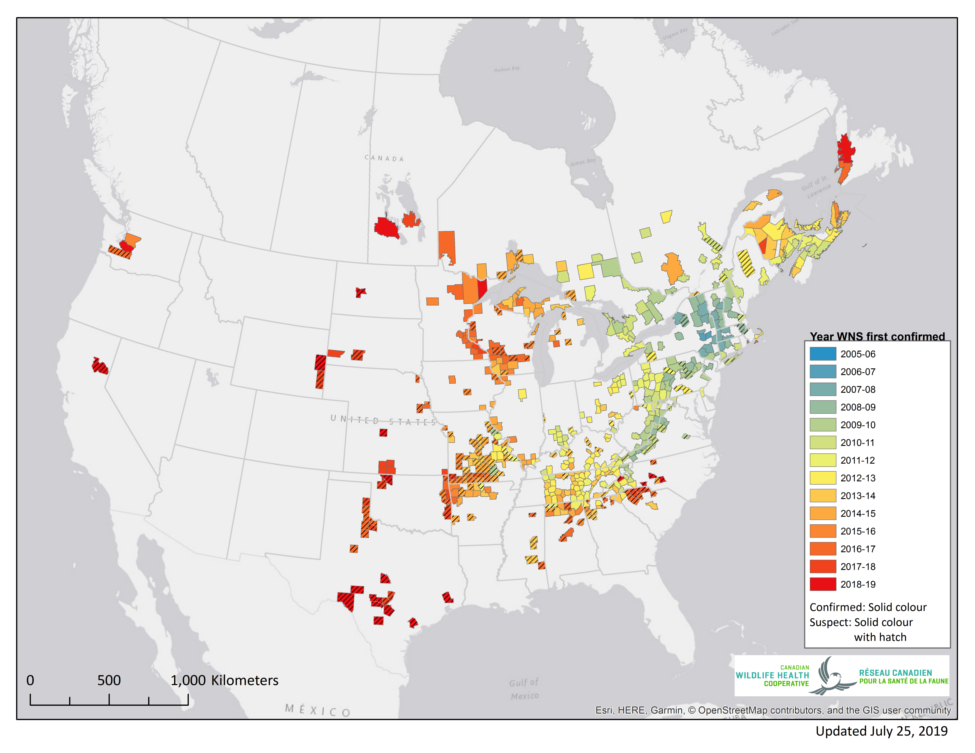 White-Nose Syndrome was discovered by the New York State Department of Environmental Conservation during the winter of 2006-2007. Since March 2008, biologists and cavers have documented thousands of infected or dead bats. Unfortunately, the spread of the fungus continues to expand each year, increasing the area affected, and the number of endangered bats.

In 2010, WNS reached the provinces of Ontario and Quebec, and a year later, New Brunswick and Nova Scotia. In 2016, a first case has been detected on the West coast, in Washingtown state.

Get more information about WNS spread on :

In locations where WNS is present, in just a few years, cave-dwelling bats have suffered mortality rates of 90-100%, which may lead to the extirpation of certain populations. Mortalities occur during the winter because the fungus infects bats during hibernation. Infection causes bats to wake up more frequently and thus, use up their fat reserves before the end of winter.

The species most affected by this syndrome are cave-dwelling bats. However, most North American bat species may be affected by WNS. A study by Turner et al. in 2011, carried out on 42 sites in the United States, assessed the overall mortality at 88% only 5 years after the onset of WNS.

White-nose syndrome is not considered a threat to human health. However, it is important to know that fungal spores can attach to clothing or equipment and cause the spread of the disease among caves. Humans can therefore unknowingly carry the fungus from one site to another. Thus, it is recommended that cavers should avoid visiting places frequented by bats in regions where WNS has been confirmed. In addition, during a visit to a cave, it is necessary to take appropriate decontamination measures before and after each visit. It is also important to note that WNS may be present in a cave where bats have not been found to have the infection, which complicates the assessment of the status of a site.

Watch this video for more information

Several options have been considered to limit the spread of the fungus such as irradiation, fungicides and biological agents. Studies have shown that fungicides do not seem to stop the growth of the fungus and may even harm the bats and cave ecosystems. However, research on biological agents seem to have provided better results. In particular, Chris Cornelison at Georgia State University has discovered a laboratory bacterium that inhibits fungal growth without affecting the bats or other microorganisms in caves. According to their research, the ideal growing conditions for the fungus that causes WNS is between 5 and 10ºC, and is inhibited at 20ºC. The bacterium Rhodococcus rhodochrous inhibits spore germination at 15ºC and stops reproduction and growth 5ºC. According to their experiments, growth of the fungus can be inhibited simply by placing a bacterial paste near the infected hibernacula (i.e. it would not be necessary to put the bacteria directly on the bats). These advances are still in the early test stages and no large-scale applicable solution has been proposed. For more information about other possible solutions click here.

Considering the significant decline in some bat species, it is essential to carry out population monitoring in order to determine the severity of disease progression. You can participate in the advancement of our knowledge of these species! Dead bats or bats observed flying in broad daylight during the hibernation period is considered abnormal, and is a characteristic sign of WNS. In Quebec, you can report these observations to the Ministère des Forêts, de la Faune et des Parcs (MFFP) at 1-877-346-6763. In the rest of Canada, these observations can be reported to batwatch@outlook.com.